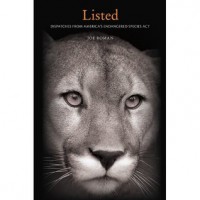 Listed: Dispatches from America’s Endangered Species Act, written by Joe Roman, is one of the most well-argued book that delves into the history and development of the Endangered Species Act (ESA), and also clearly listed the successes and drawbacks of this act. In order to completely explain these arguments, the author intricately combines the understandings of different aspects such as earth system science, economics, politics, and conservation in order to provide the most well-rounded and supported evidences about how the Endangered Species Act (ESA) can possibly change and improve their conservation acts to protect endangered species around the world at this period of time when climate change is increasingly concerned. In the book, Roman clearly states his focus on two main issues: how species are protected and what more needs to be done for the sake of the biodiversity, and the conflict between conservation and economics, suggesting that conservation can have positive effects on human population.

The author begins the book with a general and simple introduction about the history of ESA, specifying the laws and the conditions of the act toward animals that are listed as endangered. Through that, Roman then leads to the argument that Endangered Species Act needs to seriously be rethought about conservation solutions to protect the animals at the level needed to match rates of climate change nowadays. He specifically mentioned about how ESA was first accused of putting animals before humans, as well as the cost humans have to pay for the sake of the animals: “The Endangered Species Act has been accused of encouraging property owners to clear their land of native habitat.” (1). However, by doing this, he emphasizes the importance of ESA for its brave actions to protect threatened species that are hugely influenced by the changes of climate such as global warming. Indeed, he provides an argument that humans need to acknowledge the importance of cooperation with ESA to combat species extinction, since humans are one of the most impactful factors toward the sustainability of the animal habitats and ecosystem. Beside providing the history of the ESA, an environmental law that was initially passed in 1973, Roman later dives deeply into the America's accomplishments in conservation and how important the fact that humans are strongly correlated with other species for the sake of biodiversity is.

At this point of the book, Joe Roman continues his narrative by taking the readers with his exploration to investigate the conditions of a group of species such as spotted owls, red-cockaded woodpeckers, snail darters, frogs, whales, cranes, black-footed ferrets, wolves, cougars, polar bears, and bats. For each of the chapter, he concentrates in one specific species that is successfully protected and preserved, correlating with the accomplishments of ESA so far, such as the revival of the red-cockaded woodpecker in North Carolina, and the success of the conservation process for bald eagle and white tailed deer populations. Furthermore, Joe Roman clearly showed his reasons for his belief in the success of ESA, which is that the ESA is the first act to give nature, in all its forms, the right to exist (Roman 62), and that it was the first act that put nature before people. Diving deeper into the understanding of the relationship between human and species, Roman makes a point that in order to gain social and economic benefits, biodiversity needs to be considerably protected. The diversity in species and natural communities can stabilize an ecosystem, and the loss of any species can crucially upset the balance (Roman 83). As he wrote: "The more species you remove, the greater the chances that an extraordinarily important one will be lost" and "the more species you have, the more ways they make use of limited resources." (Roman 84).

In addition to the first two main focus about the importance and effectiveness of ESA, the author also mentions one of the most controversial issues - climate change, and how it is hugely affecting all species, both in negative and positive ways. In Roman’s list, global warming and habitat destruction are considered as two of the main five causes of extinction, the other three are overexploitation, invasive species, and the spread of disease (Roman 189). By touching on the issue of climate change, he indirectly drives interest and concerns for people about the concept of conservation, and how species can also protect us from the increase of climate change. While he appears to be proud of the accomplishments that the ESA has had, he also showcases the negative implications of this act, such as imposing on property rights and causing property owners to destroy habitats of endangered species (Roman 1).

Overall, Joe Roman takes a variety of perspectives in order to explain his arguments, while also supporting them with statistics. He strongly states his ideas that ESA is indeed doing a good job preserving the biodiversity, but this act needs to be improved in order to catch up with the rate of climate changes and other causes. Throughout the book, Roman emphasizes the importance of biodiversity toward the balance of the planet, as well as how human beings need to be aware of the destructions that are hugely influence the rate of extinction on species. He ends the book with a positive note and ultimate goal, giving the reader ideas for how species extinctions could reach a zero extinction rate. Essentially, Roman argues that this solution will require a fundamental reexamination of human lives and values (Roman 306). This way of ending book alters questions for readers, as well as encouraging people to take actions individually in order to prevent the threat of extinction to any of the species, rather than wait until the end when the issues encounter.

In my opinion, Listed is a well-argued book that emphasizes the importance of species for the balance of the planet, as well as the significant role of the ESA for preservation acts. Roman is extremely clear when stating his arguments, presenting his ideas by using statistics and facts, in which make his stories easy to read and appealing. The fact that he takes multiple perspectives to analyze the accomplishments and drawbacks gives readers fair views about the ESA, helping them to understand his arguments in broader ways with his engaging and clear writing also. In overall, I would recommend this book for people who are interested in the Earth’s system, human impacts on natural habitat and the rate of extinction, and the accomplishments and drawbacks of ESA for the conservation plans.